Both natural and artificial sparkling water contains dissolved carbon dioxide (CO2), which is what causes the water to fizz.

There are numerous discussions surrounding the health risks of drinking sparkling water, but how does it compare to other fizzy drinks? Let’s take a look.

Drinking water is vital for survival yet the carbonation in sparkling water has been linked to numerous health risks.

Some researchers believe carbonated drinks that contain phosphorus, such as soda, can cause a decrease of calcium in bones. Nevertheless, sparkling water contains no phosphorus, so does not pose any risk to bone health.

Instead, some carbonated waters have been linked to improving bone health, according to the National Osteoporosis Foundation. They suggest that sparkling water should not replace other beverages which are rich in calcium, such as milk.

CO2 provides the water with acidic properties which is widely known to effect and damage the enamel of teeth.

Research from 2017 concluded that artificial sparkling water caused erosion to teeth. The extent of erosion increased when greater levels of CO2 was present in the water. Flavoured sparkling water can be even more detrimental to tooth decay due to the addition of citric acid or sugars.

Nevertheless, using a straw when drinking carbonated water can reduce the decay of enamel, as it prevents contact between the water and the teeth.

For people suffering with IBS, drinking sparkling water can trigger and intensify symptoms, so it is suggested that they should avoid any carbonated drinks.

There are differing opinions and studies on whether drinking sparkling water causes weight gain.

According to a Japanese study, drinking sparkling water causes young girls to feel full, yet this study was small and did not compare the results to the effects on males.

Although sparkling water contains no calories, additives such as sweeteners and sugars can increase the amount of sodium and calories. Nevertheless, sparkling water has not been found to cause weight gain.

Research has indicated that sparkling water can cause an increase of ghrelin, which causes hunger. However, this was an animal study so cannot be verified to have the same effects on humans.

Sparkling water vs other drinks

Due to plain sparkling water comprising of only water and CO2, it is viewed as a healthier drink option as it contains no additives such as sugar or sweeteners and will hydrate the body the same as still water.

What are the health risks of sugary drinks?

Consuming a great deal of sugary drinks can cause various health risks including, but not limited to, diabetes, heart disease, kidney disease and gout.

According to the Centers for Disease Control and Prevention, sugary drinks are the main source of sugar in the American Diet. They state that around 63% of young people drink a sugary beverage containing 143 calories per day.

The organisation suggested that people are more likely to drink sugary beverages if they smoke, are sleep deprived, do not do enough exercise, frequently eat fast food or rarely eat fruit.

What healthy flavours can be added to sparkling water?

There are numerous ways that you can add healthy flavours to sparkling water.

You could add 100% fruit juice (for example pomegranate), vegetables (for example cucumber), fruit (for example lemon or strawberries), or even herbs (for example mint). Adding these healthy flavours also have the advantage of extra vitamins and minerals.

Overall, sparkling water does not cause risk to bone health, however, it can contribute to tooth decay and trigger IBS symptoms.

More studies on sparkling water and weight gain should be completed to identify any effects, but numerous other beverages have been proven to contribute to health risks.

Sparking water is clearly a healthier alternative to sugary drinks and flavours can be added to water which will make them just as enjoyable. 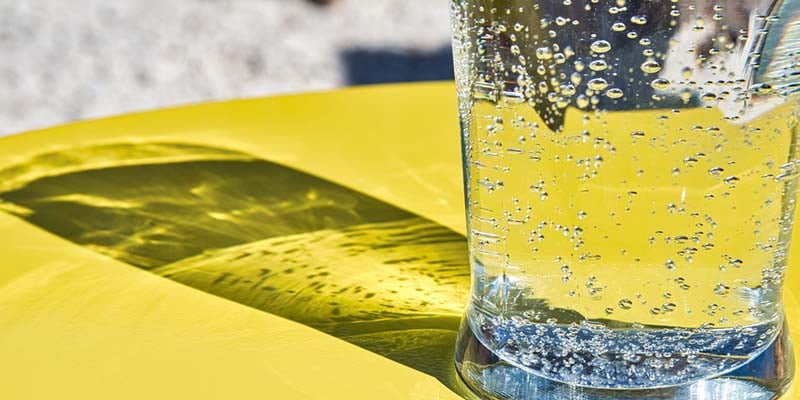 Sparkling Water – is it good for me, benefits, disadvantages